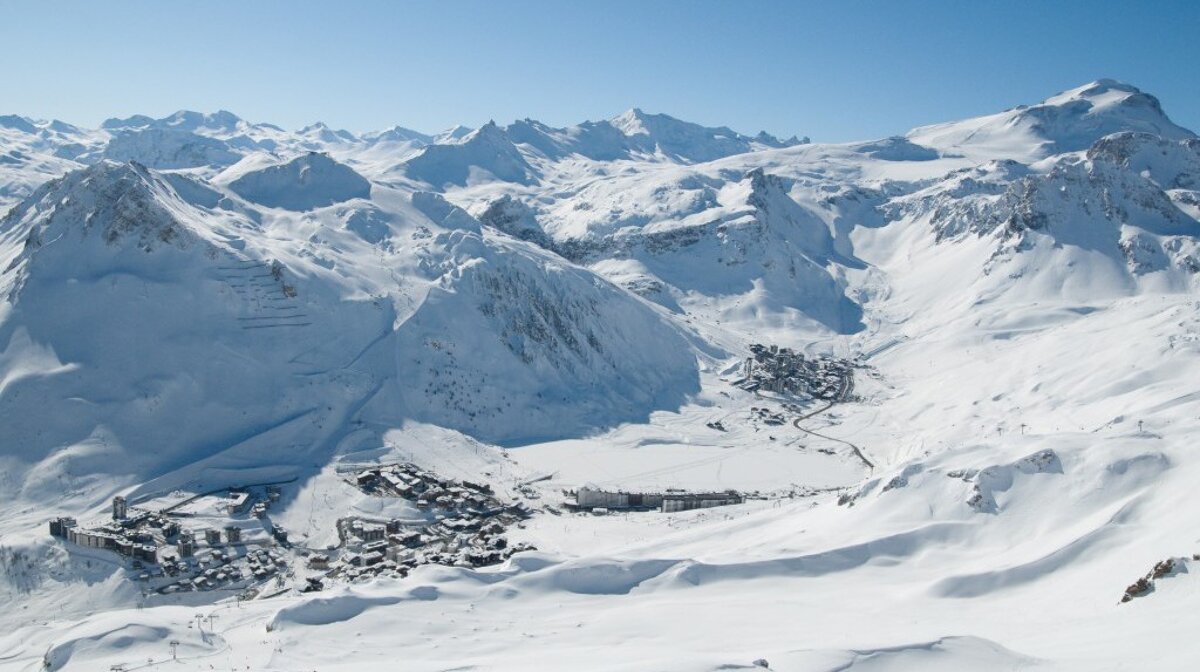 Tignes is part of the Espace Killy ski area in the French Alps, with ski terrain ranging from 1550m at its lowest point to just under 3500m at the top of the glaciers. This altitude makes it very snow sure and with 300 kilometres of pistes, there's a lot of ski area to enjoy.

The 300km of pistes in the Espace Killy are accessed by 90 ski lifts and funicular railways to reach the glaciers (see the piste maps). There are 20 green pistes, 67 blues, 41 reds and 26 blacks, and 2 snowparks, making it popular with skiers of every level of ability.

In Tignes alone there are 47 ski lifts, a funicular railway, a cable car, 24 chairlifts and 19 drag lifts, enabling you to ski around the 150 kilometres of pisted terrain. The Tignes ski area can be split into four areas, La Grande Motte Massif, Palet/L’Aiguille Percée, Toviere and Les Brévières.

The Grande Motte
The Grande Motte is the highest massif in the Espace Killy; a mass of rock, ice and permanent snow cover on the glacier at the highest point. It is the only part of the Espace Killy ski area which is open in every season. It can be accessed by either the Funicular railway (which runs in all weathers, taking approximately 3000 skiers an hour) or by taking the Lanches and Vanoise chairlifts, then finally the Grande Motte Cable car. The scenery is absolutely stunning at the top of the Grande Motte and you should stop long enough to look across the mountains and at the Vanoise National Park, the Grande Casse (3852m), Mont Blanc (4807m) and the Grande Sassiere (3747m). Skiing on the Grande Motte offers a good choice of wide open blues and some more challenging reds. It can often be deceptively cold on the glacier, and not always conducive to learning as some of the slopes can be steeper than expected.

l'Aiguille Percée / Palet
The L'Aigulle Percée /Palet massif is accessible from Val Claret by the Tichot chairlift and from Le Lac by the Palafour. There are a number of cruisey intermediate blue and red runs here. Although there’s not a huge selection of blacks, you can try the Sache, a long black run from the top of the L’Aiguille Percée (the famous 'eye of the needle') to Tignes Les Brévières. It provides some fierce moguls and challenging skiing.

Toviere
The Toviere sector provides links with the skiing in Val d’Isere, and is accessible by taking the Aeroski bubble from Tignes-Le-Lac or the Tufs and Bollin chairlifts from Val Claret. You can enjoy a number of gentle blues and more challenging reds, particularly the Combe Folle which leads into the mogul covered, steep black Trolles piste down into Le Lac. This area tends to be busy as it is the link with Val d'Isere and the whole of the Espace Killy.

Les Brévières
The lowest part of the Tignes ski area, Les Brévières is a nice little sun trap from early on in the morning, making it the perfect resting point for a spot of lunch on a sunny day, especially in the warmer months of the season. The pistes in this area mainly consist of easy wide blues and slightly more challenging red runs. The highest point in this massif is the L’Aiguille Percée (2748m) which offers some visually dramatic and geological oddities in the curious rock formations, and is also the location of the famous "eye of the needle."

Snowpark
There is also a snowpark at Val Claret giving riders the chance to try their hand at some freestyle jumping, rails and big air. For the more adventurous Tignes has access to some of the worlds best off-piste areas.

Summer skiing
Rather uniquely Tignes also has a vibrant summer ski scene with snowparks up on the glacier, well-groomed pistes as well as gentle nursery slopes. It attracts ski teams, racers and freestyle skiers and snowboarders from around the world.

If you fancy some wide and rolling pistes then the place to head to is the Tignes Le Lac/ L'Aiguille Percee side of the mountain in Tignes. With a host of fantastic blue runs that can either be made into a long rolling piste by heading all the way back down to Le Lac or slightly shorter by doing a few loops of a chairlift higher up. Taking the Grand Huit chairlift up and heading down the Percee Neige blue piste you will find this run to be quieter than others in resort and with stunning views over the Tignes Valley it is one to head to. For spectacular views head up the Aiguille Percee and enjoy the famous 'Eye of the Needle' rock formation and take the lovely long Corniche blue piste down to the top of the Chaudannes chairlift.

If you are a complete beginner, then it is likely that you will be joining ski school for most of your stay – it is worth discussing with them which pass option is best suited for you.

Tignes has also developed a three-step "Ski Start" progression programme located on the gentle snow fronts in Val Claret, Le Lac, Les Boisses and Les Brevieres, These dedicated beginner areas have been designed so that you can learn by yourself or with an instructor (recommended!) on slopes suited to mastering new sensations and building your confidence.

The "Ski Start 1: Discover" and "Ski Start 2: Learn" areas will allow you to get used to the feeling of sliding on snow and discover the beginner areas of the resort. Lifts here are free. Once your confidence grows, you can try the "Ski Start 3: Practice" areas which consist of a series of gentle blue runs where you can work on your technique and style. Ski Start 3 zones require a Tignes local area ski pass (1/2 or 1 day).

In a nutshell, if you are taking to skis for the first time in Tignes, it is unlikely you will need to buy a ski pass for at least the first day or so.

Tignes has a number of extremely challenging and advanced pistes. With a host of "naturide" (un-groomed) black runs, steep pisted blacks and some reds that are verging on blacks you can test skiing and enjoy some of the challenges Tignes has to offer. Tignes boasts the area's longest run, an exhilarating 10km black run called La Sache, that descends from the top of the L’Aiguille Percée and 'the eye of the needle', through a spectacular valley to Tignes Les Brévières.

In the afternoon, ski to Tignes les Brevieres on Sache, probably the most challenging black run in the resort, as it is usually full of moguls! Providing the snow conditions are good, it can be a fantastic run. There is an escape route on Echappatoire and Pavot if it does prove too tricky. Alternatively, try the Silene black naturide piste under the Marais lifts, it is not always open so if it is, it is definitely one to try.  Head back to Le Lac and Val by taking the Sache bubble, Aiguille Rouge, Bleuets run, and Aeroski back to Val d’Isere.

Tignes Les Brevieres has some lovely off-piste skiing and can be especially handy when it is a white out as you can pick and choose some lines in between the trees. From the top of the Aigulle Percee chairlift if you head to the right there is some off piste that you can tackle- but be warned the mountains can leave you stranded at the bottom not knowing which way to go so make sure you have a mountain guide with you or plan your route extremely carefully.

There are also plenty of off-piste sections to slide down by the side of the marked runs and pistes, and normally from the lifts you can spot the best off-piste snow next to the runs.

The Bellevarde side of the mountain has the most off-piste skiing to offer, with 3 particularly well known off-piste slopes. The Banana, this is a very large vertical drop. The snow here heats up early so aim to ski this section in the morning. Go down the start of the Face from the top of the Olympique cable car and at the first bend to the left, continue straight on past an obvious rock on the right-hand side. The first slope is very easy and leads to a level area with rocks at the end. Go left of these rocks down to another level section before taking the slope right down to the bottom of Santons.

In Tignes, the snowpark can be found at the top of the Grattalu chairlift. The park here is on a long flowing run with a good high-speed chair at the bottom or you can also use the Col du Palet drag lift. The features here are better suited to beginners and intermediates as the kickers are not that big. If you are new to the slopes you may find it easier to use the Grattalu chairlift to access the park as the drag tow that runs up its side is long and maybe a little tricky if you are still finding your balance.

Probably the best freestyle feature that Tignes has to offer is its halfpipe. This sits at the base of the Les Lanches chairlift at the top end of Tignes Val Claret. The pipe itself is impressive, not many resorts in France have one.

If you do fancy heading out on the slopes (despite the bad weather) then one of the best areas to head to in poor weather conditions in Tignes is the bottom of the Les Brevieres area, as the trees running down the sides of the lower pistes will provide much better visibility. Alternatively, you can try tackling some of the lower pistes of the Grande Motte where the cloud may be thinner and might provide better visibility.

When the weather closes in and you are up the mountain the best thing to do is to head slowly down as safely as possible. Usually, when there is a whiteout up top on the slopes the lower you go the more visibility you will get as the clouds will become thinner. Another alternative is to stop at a restaurant to see if the weather clears, but make sure you have an obvious route down as the weather could get worse, not better. If you are in L'Aiguille/Le Palet area then you can stop at the top of the Chaudannes lift at the Lo Soli restaurant. If the weather doesn't pass then head down the lift back to Le Lavachet. If you are up the Grand Motte area head to the Panoramic restaurant at the top of the funival to wait the weather out or take the funival back down to Val Claret.