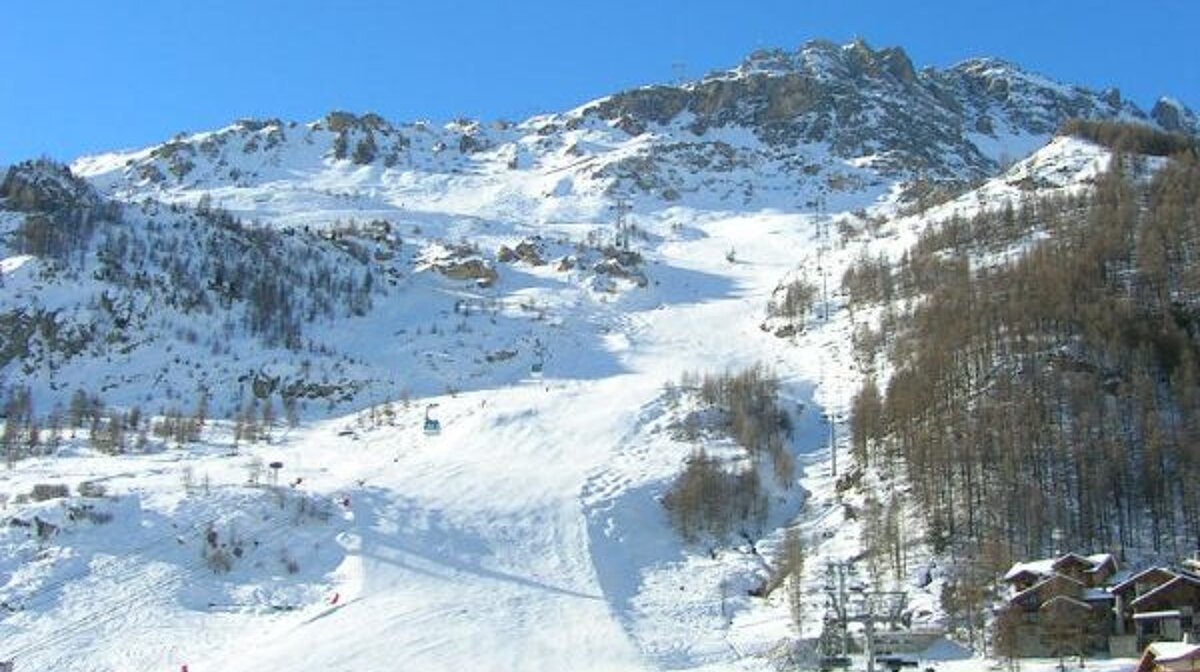 Contenders…. Are you ready!?!

The black runs of the Espace Killy are some of the toughest blacks you will find anywhere, with two runs having been used during the men’s Olympic downhill in 1992. These black runs are namely Campanules, Epaule de Charvet, Face, Foret, Leisse, Oeillet, Piste ’G’, Piste ‘S’, Primeveres, Raye, Sache, Silene, Trolles, Tunnel and Ves.

If you and your group are up for first lifts, a serious leg and knee knackering, hard core challenge; then try skiing all blacks in the Espace Killy area in one day! You might also want to book the services of your friend, or a taxi, to take your tired and weary bones from Tignes Val Claret back to Val, if that’s where you’re staying. (Be warned, some blacks will not be open, depends on snow coverage and lifties!)

Start off by getting the free bus up to the area of Le Fornet, Val d’Isere. Take LE FORNET cable car and ski down on the Fornet run. This has to be one of the hardest of the black runs you will encounter. It’s covered head to foot in moguls, so good to get the knees in gear for the rest of the day! Take the FORNET and VALLON DE L’ISERAN cable cars before taking the 6-seater LESSIERES "up and over" chairlift. Continue down the wide and easy blue, Lessieres run to take the GLACIER EXPRESS and ski to the 3000 drag lift to complete the 3000 and Tunnel runs. (Note: The 3000 and Tunnel runs are frequently not open. It depends very much on snow conditions.) If you are lucky with the weather, snow and manage to squash these two in, then take the LESSIERES chairlift back down to the DATCHA lift. After following the easy blue to the top of the Solaise ski area, descend via the steep, gun barrel Piste ‘S’ which is certainly black, jet black!

Hopefully by now you’re back at the bottom of the Bellevarde and Solaise ski areas. Take the L’OLYMPIQUE gondola and ski the Olympic La Face run. It has to be said though, that this ranks as one of the less terrifying black runs in the area. Although fearsomely steep and typically very icy in places, it’s also very wide and open. Take the L’OLYMPIQUE bubble back up and descent the red run under the FONTAINE FROIDE chairlift before skiing down the Epaule du Charvet. (Note: If there has been heavy snowfall, it’s possible this area will be ‘closed’. Take note of these warnings as the aggressive and steep mountain contours means this is a high risk avalanche area.) Follow the easy, flat Santons blue run back to the Solaise / Bellevarde area.

It’s now time to head towards La Daille for the Piste ‘G’ and Raye runs. Take the L’OLYMPIQUE bubble back up, and hoon it down either the Orange or Ok runs, maybe stopping off at La Folie Douce for a quick refreshment. After completing Piste ‘G’ and Raye, take the DAILLE bubble back up and ski over to the TOMMEUSE 6-seater high speed chairlift heading towards Tignes. At the top of the Toviere area, descent towards Val Claret via the mogul field of Campanules. This run is very intensive on the knees, and snow cover sometimes poor. Cut right when you reach arrival of the BOLLIN chairlift and head towards the TUFS chairlift. At the Toviere area again, take the quiet red Cretes and Combe Folle. Join the Trolles run and ski towards Tignes-Le-Lac. This is an easy black, steep, but not full of moguls. You have to get a fair bit of speed up from about half way down the final descent, to ensure you don’t have a long walk out at the bottom. Now take the slow 3-seater PALAFOUR chairlift descending via the Oeillet and if safe to do so, scooting across to complete the Primeveres before doing the PALAFOUR chairlift again, except this time taking skiing towards the AIGUILLE PERCEE to descend via the steep and seriously challenging Silene. Ascend via the MARAIS chairlift, this time taking the earlier right hand option of the equally challenging Sache down to Tignes Les Brevieres. It’s a bit of a wiggly weavey route to get to the remaining 2 black runs.

Next head for the COL DES VES. Take the SACHE bubble and MARIAS chairlift. Ski down the red Cyclamen, joining the bottom of the blue Perce-neige run heading for REPLAT and MERLE BLANC chairlift. Descent via the very easy wide Grattalu towards the COL DES VES long 3-seater chairlift. After completing the Ves run, head back down to Val Claret and the FUNICULAR. So.... this is it… the last run of the day…. It’s probably very late afternoon now, and you’re absolutely knackered. Ski the final black of the day, Leisse which is short, but sometimes quite mogulled before ascending via the LEISSE chairlift, now STOP!! This is a brilliant place to finish the day. Take a moment to observe the entire Espace Killy region that you have just covered!! Descend down to Val Claret for a well deserved LARGE pint of beer!! WELL DONE!!

Find your way around with Piste Maps for Tignes.

Find your way around with Piste Maps for Tignes.

Take a look at this year's Ski Lift Pass Prices and if you're not sure which one to buy, read our Guide for more information.